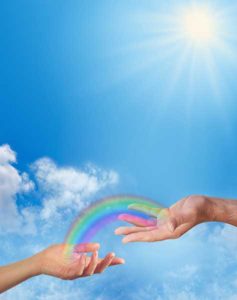 Distant healing is a concept that is becoming more widely known and accepted.
It is also called remote healing or absent healing or long distance healing.

When I completed a degree in acupuncture many years ago, I remember the feeling of disappointment my parents had. Not many people knew of Acupuncture back then and I found myself explaining what it is and how it works to family, friends and acquaintances who asked what it is I do for a living. There was a lot of scepticism and I’ve seen more than a couple of eyebrows raised at my choice for a profession.
Sixteen years have passed since then and acupuncture is now covered by private health care in many countries around the world and it’s used in hospitals in some countries.

I feel like I’m on a similar journey these days when I tell people I do mainly distant healing for a living. I studied and investigated many types of healing and learnt that muscle testing or kinesiology can be done from far and we can tap into someone else’s energy and get information on what is going on for them and facilitate healing using several distant healing techniques.

I knew it works, but as most people weren’t open to it, I kept treating people at the clinic and I never tried to do long distance healing.
One day nearly 10 years ago a woman contacted me from the States (I lived in Australia at the time) and said she heard of me and asked if I can help her with a severe allergy she has that forces her to use an oxygen mask.
I replied and said that in theory it should work, but I’ve never done it before and therefore I’d like to treat her for free and see if there’s any change after the treatment.
She did extremely well after one session and for the first time in a long time, she felt physically ok without the use of the oxygen mask.
My career as a distant healer started at that point and people found me mainly through word of mouth.
I have since then done hundreds of remote healing sessions. I have helped children with behavior difficulties, autism, hearing problems, vision problems, autoimmune diseases and allergies.
I often treat babies and children that aren’t even aware that I’m treating them and there is a big improvement, so we can’t even say it’s placebo (as I’m sure some of you are probably thinking right now).

Quantum physics has proved distant healing is possible and I’m so grateful for that as it makes it easier for me to explain what I do and as science is backing it up, I feel like more and more people are opening up to it.

So how does distant healing work if the person isn’t in the same room with me and often not even in the same country?
I’ll explain that and more in my next article.

My name is Tomaya Weiser and I am a qualified Acupuncturist with a Bachelor of Health Science from the Australian College of Natural Medicine. I am also a certified practitioner of IPEC, Theta healing, Pranic healing and Kinesiology.

Hi Tomaya, you treated my little girl many years ago for allergies and asthma. She only needed the one treatment for salicylates and she has been free of issues since, so thank you!

There is no other way to describe this other than Magic. At first, I couldn't get myself to believe that distant healing can work, but apparently it's worth trying new things. Before I started these treatments, I had a sensitive bowel. I had symptoms like bloating, heaviness and stomach pain after eating and after just 3 treatments, I'm feeling significantly better. The bloating has gone down, the heaviness is barely there and the stomach pains are a lot better. I have been treated for salicylates and Tomaya also worked on my digestive system. I strongly recommend to keep an open mind and try this therapy.

My physical and emotional health have improved dramatically since you started treating me. I have been suffering from Colitis and its not very pleasant associated symptoms. The treatments from far totally work! My problems are disappearing and I know this is a journey and there is a lot to treat, but I’m filled with excitement at the possibility of healing entirely. I can’t recommend you enough! Thank you!!!

Having had a major flare up of ulcerative colitis in Aug 2015, which resulted in 12 days in hospital and 2.5 months of some very strong conventional drugs (Oral and infusion) I was only progressing very slowly.My specialist was strongly suggesting removal of the large intestine, so I looked for alternatives. We remembered having had great success with treating my son's eczema with Tomaya from Allergy Field. After the first treatment I noticed a significant improvement in symptoms and it got even better after the second treatment. This was backed by having had two sigmoidoscopys (Either side of Tomaya's treatment). The specialist stated after the first one there was " serious ulcerative colitis" and one month after, second test "mild inflammation, no signs of ulcers or bleeding". Between the scopes I had two treatments with Tomaya and I believe this has had a huge effect on my symptoms. Thank you!!

Surprised and happy to find I felt greatly improved the following day- despite my being skeptical about the treatment. I haven’t changed anything else in my diet or my environment and 10 days later, I am pretty much symptom free. Thank you.

My 6 year old son has been complaining of severe stomach pains after eating. We’ve been to several specialists, but they couldn’t find anything. His pains are completely gone after one treatment. Thank you.

My daughter has had severe diarrhea from a very young age. She also gets red spots around her mouth and she throws up occasionally after food. I tried to eliminate what I thought was causing her symptoms, ut didn't have much luck. We had one treatment with Tomaya done via distance 2 months ago and there has been no diarrhea or skin rashes around her mouth since.

The connection between autoimmune diseases and allergies

An update from Nicaragua
Scroll to top

Your information is 100% secure and will never be shared with anyone.